My wife cancelled her membership at Xercise4less in November and received all the appropriate emails / correspondence – there was some issue with the club not informing Harlands (the company that deals with financial matters for Xcercise4less). My wife tried to sort this out by personal visits to the club, emails and telephone calls but was passed between Credit Resolutions and Harlands, each saying that she had to speak with the other. Very frustrating.

My wife then received the following text:

“Your account is in default and is about to be handed over to a third party doorstep debt collections agency. To avoid a home visit please call 01132038602 now.”

She rang the number and was told to go back to the club and speak with the manager Glen Hunt. She tried ringing yesterday, apparently Glen was in a meeting, but would call back. Still waiting.

I tweeted about the issues this morning. About 1000 hrs. or thereabouts.

Firstly they replied calling me Richard, which just goes to show their administrative competency.
Their next reply was that Glen would be in touch shortly.
It’s now nearly 1700 hrs. Still nothing. 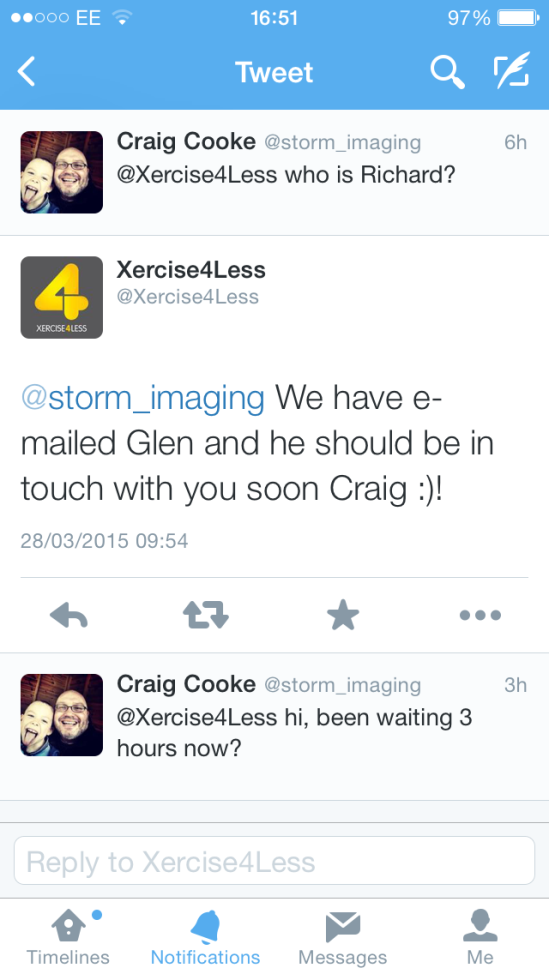